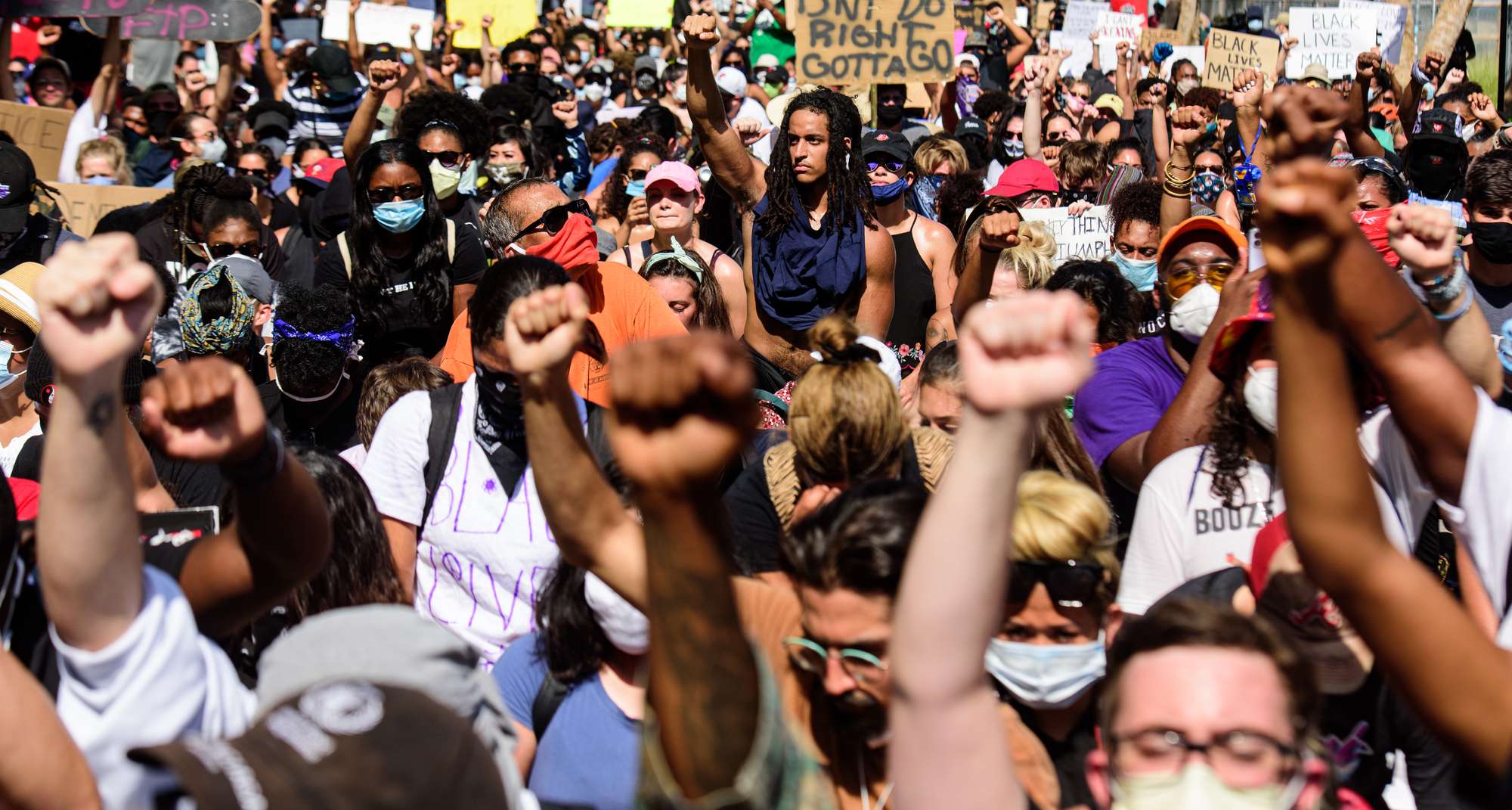 Black Lives Matter Global Network Foundation, Inc. is a decentralized social and political movement formed in response to the acquittal of George Zimmerman for the murder of Trayvon Martin in 2012. Since then, the movement has grown to encompass the broader fight against racism and anti-Black violence and was further propelled in 2020 following the police killings of Black men in Baton Rouge and Minneapolis. The Movement for Black Lives, a coalition of organizations and groups dedicated to setting a progressive agenda for the liberation of Black people globally, also received over $100 million in funding in 2016. Three female Black organizers – Alicia Garza, Patrisse Cullors, and Opal Tometi – spearheaded the movement at its inception and have become iconic figures in the fight for racial justice and equality.

The death of George Floyd while in police custody in Minneapolis served as a catalyst for the global Black Lives Matter movement. In the United States, BLM organizers across the nation took to the streets in protest, demanding an end to systemic racism, police violence and racial injustice. Polls suggest that 15 million to 26 million people in the U.S. participated in protests throughout the summer of 2020. BLM has leveraged protest events to engender lasting changes in the way Americans discuss racial justice, and to demand accountability for police killings. Female Black organizers have been at the helm of the movement, pushing for policy changes and demanding justice for victims of police brutality. With millions of people taking part in protests, BLM’s influence has not only been felt in the United States but has inspired activists abroad.

3. Funding of the Movement for Black Lives

The Movement for Black Lives has since 2016 received more than $100 million in donations and grants. Although the funds have been used to support numerous community-based initiatives, questions have arisen about the transparency of donations. Activists have expressed concern that not enough has been done to ensure that the money ends up in the right hands due to a lack of transparency. Despite this, the official #BlackLivesMatter Global Network, which is committed to building power and bringing justice and freedom to Black people worldwide, has been able to carry out its mission with the help of these funds.

4. Female Black Organizers at the Helm of the Movement

The summer of 2020 saw the rise of the Black Lives Matter movement, with activists and demonstrators taking to the streets to express their outrage over systemic racism and police brutality. At the helm of this movement were female Black organizers, such as Patrisse Cullors, who has been leading the Black Lives Matter Global Network Foundation for nearly six years. Despite facing attacks from a far-right group and criticism from other Black leaders, she has been an unwavering advocate for justice and freedom for Black people globally. In addition to Patrisse Cullors, John Sloan III has also been an integral part of the movement, girding himself with a team to highlight the impact of police violence on marginalized communities. It is clear that these female Black organizers have been instrumental in leading the way toward a better future for all Black people.

5. Declining Support for BLM in Polls

In recent months, polls have shown a steep decline in support for the Black Lives Matter movement. According to a poll conducted by YouGov, support among black Americans has dropped from 52% after George Floyd’s death in 2020 to 45% in 2021. Similarly, support among whites dropped from 62% to 45% and as low as 16% among white Republicans. Latino support for the movement also fell by 11 percentage points. The poll results suggest that the movement is facing a decline in both people’s awareness and their willingness to actively participate in it.

Black Lives Matter is a decentralized political and social movement that seeks to highlight racism, discrimination, and racial inequality. Led by activists in local chapters, the movement grew nationally in 2014 after the deaths of Michael Brown in Missouri and Eric Garner in New York. In 2013, Cullors, Garza, and Tometi created the Black Lives Matter Network with the intention to be decentralized. Opposing racism and police brutality, people united around the phrase Black Lives Matter (BLM). The official #BlackLivesMatter Global Network builds power to bring justice, healing, and freedom to Black people across the globe. Last year, BLM protests shifted public discourse towards the movement’s agenda as captured by social media and news reports. Furthermore, BLM is not just a protest movement but also a call for accountability for police killings. The lawsuit filed by grassroots chapters of BLM is a testament to this demand for accountability.

In September of 2020, 26 chapters of Black Lives Matter Grassroots filed a lawsuit in Los Angeles County Superior Court accusing the top executive of the Black Lives Matter Global Network Foundation, Shalomyah Bowers, of misappropriating funds, self-dealing, and using the organization as a personal piggy bank. The initial complaint sought financial relief and a court order halting the Foundation’s use of the BLM identity. The lawsuit seeks damages and restitution for the alleged misuse of funds, as well as a temporary restraining order to block the Foundation from using the identity and materials of Black Lives Matter.

The Movement for Black Lives (M4BL) has been demanding accountability and justice from police departments for years. Since 2015, police officers have fatally shot at least 135 unarmed Black people nationwide, the majority of whom were white. Every time another Black person is murdered by the police, it’s easy to point to a single officer as the culprit, but it’s important to remember that systemic racism, which allows these killings to continue unpunished, is the real culprit. In response to these incidents, M4BL has fought for changes such as a duty for officers to intervene, report, or render medical aid in instances of police misconduct; and policies relating to law enforcement accountability and transparency. Genee Tinsley, an organizer from Palm Beach County, Florida, was one of many people who took to the streets last summer to protest police brutality and demand racial justice.

The allegations of theft and mismanagement have been a major blow to the BLM movement. The lawsuit against the global network leader Shalomyah Bowers, filed by Black Lives Matter Grassroots, has brought attention to the financial mismanagement of funds meant to support BLM organizing. The complaint seeks financial relief and a court order halting GNF’s use of the BLM identity, accusing Bowers of siphoning more than $10 million for personal use. This is a major setback for a movement that has been at the forefront of demanding justice and freedom for black people globally.

The Black Lives Matter movement has been pushing for justice and freedom for Black people around the world, with the #BlackLivesMatter Global Network building power to bring these goals to fruition. After receiving over $100 million in funding in 2016, the Movement for Black Lives, a coalition of organizations and groups, has been able to expand its reach and focus on empowering Black people. In 2013, three female Black organizers founded the movement, and this year marks the 10th anniversary since Trayvon Martin’s death sparked the Black Lives Matter movement. The movement has grown from a hashtag to a decentralized political and social movement, with chapters demanding accountability for police killings and taking legal action against those who have stolen funds from the movement. The struggle continues, with corporate entities joining forces with Republican senators like Mitt Romney to protest police brutality and racial injustice, while local BLM organizers reflect on 2020 that rocked the United States and chart their priorities for 2021.

Kanye West Claims He Owes $50 Million to the IRS